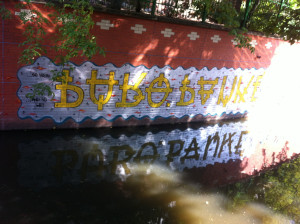 What is a scientific author? Today this question seems more urgent than ever, protruding into heated debates on social, epistemic, commercial, and ethical aspects of contemporary science. In February 2015 a workshop was held in Leiden, the Netherlands, bringing together participants from the worlds of academia, publishing, think tanks, research information systems, science policy, and activism, each with their own take and commitments on this important topic. The Authorship in Transition workshop was hosted by the Lorentz Center in Leiden, which formed an innovative backdrop in which a more bottom-up workshop format could thrive. Below we summarise some of the outcomes of the week, which we hope will inspire new collaborative ventures into the topic going forward.

Interdisciplinarity and Comparison: A Workshop on Cultures of Video Games Concerns by Alison Marlin

Interdisciplinarity is ever present in academia, but difficult to do well. This report reflects on a workshop that combined two different disciplines, STS and Games Studies, which are themselves interdisciplinary, meaning that participants came from a wide variety of disciplinary backgrounds, as well as from outside of academia. The workshop aimed to examine some of the ways in which concerns about video games are enacted and sustained in particular settings, and how these concerns help to enact other objects and relations. The challenge of generatively working together varied knowledge traditions in order to engage in a shared project was met through a careful workshop structure and a double comparison, between and across two countries and four social domains.

Caring for Participation in STS: From Empowered Patients to Ghostbusters by Karen Dam Nielsen

In this short report from the EASST Conference 2014, I sketch a handful of presentations that engaged with ‘participation’. Two tracks, in particular, offered interesting analyses and conceptual experiments. The first track contained primarily empirically driven studies of ‘technologies of participation’ in (health) care and provided illustrations of the conceptual ambiguities and empirical implications that continue to make participation a problematic, yet highly relevant and intriguing STS-topic. The second track featured presentations that more explicitly contributed new analytical tools for studying participation – primarily aimed at studies of public participation in deliberative processes, yet of potential relevance for studies of seemingly more ‘private’/less ‘political’ forms of participation.

Quantifying the Body and Health: Adding to the Buzz? by Michael Penkler

Questions of measuring and quantifying the body and health are currently very popular research topics in STS. In this short reflection, I engage in discussing the ontological politics of STS engagements with hyped topics such as the quantified self. I argue of the importance of reflecting in how far we ourselves as researchers add to the buzz, and to be conscious about the affinities of our own research apparati to the topics we study.

This text presents some reflections on a small group of presentations focusing on domestic energy consumption given during the ‘Sociotechnical asymmetries in energy issues’ track at the last EASST conference,. It is my understanding that there is an important role for STS to play in this issue, as the analytic frameworks developed within the discipline – practice theory and actor-network-theory – challenge the dominant societal understanding of energy consumption and thus may contribute to shift the discussion towards a more inclusive design of technology and public policy.

The Situating solidarities conference provided a platform in which various conceptualizations of responsible research and innovation could be discussed, challenged and placed against the background of broader discussions of what it means to do good science. This paper reflects on some of the discussions that occurred during the conference and points of interest that arose in the process. It discusses recurring themes highlighted by various presenters and makes connections with the implicit framings of RRI concepts displayed on different conference tracks. An idea underlying many presentations was that RRI requires active work and that this work often involves an alignment between society and innovation.

Zigzagging between Trust and Social Institutions by Simone Belli