As we gathered outside the conference centre in Barcelona, Luke explained that he would take us on an exploratory journey of a project he had devised that investigated the ethics of urban living in a future-time. In this imagined time, urban dwellers were moved around from apartment to apartment, experiencing little in the way of permanent residency in one place. Furthermore, an imagined organisation called, ‘The Citizen Rotation Office’ was responsible for the selection of appropriate accommodations based on each individual’s personal preferences. These preferences were collected and collated by an algorithm that filtered through the social media and online profiles of each individual, matching them with appropriate neighbourhoods, providing key information about events and places in the neighbourhood and even barring access to certain other parts of the neighbourhood the individual would be moving to. The performance / lecture was run in the same manner as a local tour might be, in that we the audience were guided around the streets by Luke, who used his mobile phone and a speaker connected to it, to play GPS-triggered recordings of the monotone, digital voice of The Citizen Rotation Office. The tour was cleverly created to be site-specific, so our imagined future-time of urban Barcelona corresponded to what we could see with our own eyes as we walked. Always, alongside the bright happy sales pitches of imaginary Rotation Office users, we were constantly reminded of no-go areas and forbidden streets. Should we stray from the planned route, our membership of the Office and thus our ability to find accommodation, would be terminated.

The performed lecture provided an immersive, site-specific style of presentation that allowed for a truly affective connection with the issues Luke wished to interrogate, including: the power of algorithms and their potential future in the development of smart cities; the changing styles of urban dwelling – with particular relation to issues of permanency / temporariness in the housing market; and the rise and character of state / corporate power in the everyday lives of citizens, with particular relation to control over housing, community experience and everyday purchasing ‘choices’ of individuals.

Using performance to interrogate and enhance the development of critical thinking about contemporary issues has its advantages – advantages such as the development of affective responses, embodied thinking and connection with site and space. As an academic community, we are perhaps more used to dealing with concepts via the linguistic space alone – that is we often discuss issues via critical appreciation of the semantics and/or semiotics of a phenomenon, rather than include the real materiality that is part of the event studied. As feminist materialist scholar Karen Barad states “language has been granted too much power…”1 What Luke’s work attempted at was an actual inclusion of the body, of the spaces and sites, of the technologies discussed in their physical forms – forms that are often prone to error and even decay – as many of us couldn’t really hear all the information given due to an effect of urban, ambient noise, a reality pointing to the way that material-discursive phenomena can disrupt the best laid plans of mice and men…

Luke often drifted between representing his work as a project, and immersing us in the experience of the project itself, as we walked around the Barcelona streets. I appreciated this as – intentionally or not – it drew my attention to the differences between traditional conference forms of representing knowledge, and more nonrepresentational forms of knowledge as performance and performativity. The concept of knowledge as a performative practice has been discussed by feminist new materialists, such as Barad, Kirby, and Haraway who are at pains to bring concepts such as diffraction further into the critical analysis of events. Diffraction can be described (but not limited to) the performative differencing of phenomena that does not treat ontology and epistemology as separate entities, but as entangled together as onto-epistemology. Thus, knowing and being are inextricably bound up with each other. There is no stable out-there upon which to comment. Rather knowledge is performative, it acts performatively to shape the very world it attempts to study, leaving the concept of stable, separable units of being behind.2 Thus, as we walked as a conference track group we arguably participated in creating the themes of the talk itself. Also, not just ourselves, but the environments we encountered, the noise, the temperature, all manner of nonhuman factors contributed to the phenomenon of the Citizen Rotation Office as it was performed in Barcelona. Furthermore, this creation was developed not just in the linguistic space of concepts, but also in the material-discursive space of walking, hearing, being in material spaces, rather than within the cardboard-like walls of a conference centre.

As a performance artist and scholar myself, working on developing transdisciplinary practices for higher education contexts, I thought Luke’s work hit home in terms of using arts-based practice– specifically performance practice – to develop and enhance new forms of critical research. The practice itself clearly informed the critical research project, whilst also remaining uniquely an artwork in its own right therefore arguably occupying its own space in the burgeoning world of Practice-as-Research. Practice-as-Research is a form of research that originated in Theatre and Performance Studies disciplines. In the main, it promotes the idea that the kind of research that takes place in the development of an performance brings its own embodied, material form of critical analysis into productive play with more traditional discursive-only forms of research more traditional to the academy. 3 Luke’s work clearly provides a platform for the discussion of the further use and relevance of Practice-as-Research for the STS community.

‘The Citizen Rotation Office’ effectively demonstrated that different streams of knowledge from different forms of critical research practice and performance can usefully develop and enhance discussions on how Science and Technology might impact on the ethics and practices of a not-too-distant future-time. As technologies grow exponentially, bringing the use of Big Data and algorithms more deeply into our lives and communities, as smart cities grow in size and quantity across the globe, and as we as scholars grapple with the impact and effect of these on a global world, how do we want to develop smart thinking in order to evaluate and participate in the creation of this future? These are the kinds of questions that the kind of work, like Luke’s performance-based style of “prototyping” raise. The work arguably moves towards taking a diffractive approach to critical research practice as it incorporates performance, performativity, affectivity (in relation to the sensations evoked in the audience who walked about imagining the ethics of this future-time) and material-discursivity into the research of the phenomenon of urban planning. I hope to see more material-discursive, embodied, affective and performative works like these growing in our STS community. 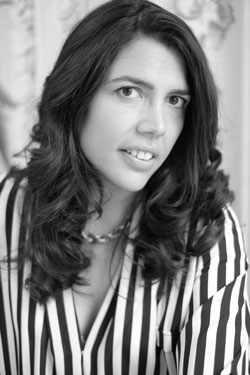 Annouchka Bayley has just completed her PhD in developing posthuman approaches to teaching and learning in higher education at Warwick University, UK. She has published several articles and book chapters on transdisciplinary education and has a forthcoming monograph with Palgrave Macmillan. In 2014 she won the Warwick Award for Teaching Excellence. As an artist she has performed over 20 one-woman, issues-based shows in Europe and Asia. You can find out more about her current research here: