Science has a great potential to improve the world. However, to utilise this potential the relationship between science and society needs to be positive and strong. A part of my professional ambition is therefore to improve this relationship, and I am worrying if I see these two entities drifting further apart. For instance, I see how knowledge creation is being liberated from the traditional source of the academic institution and news media, and at the same time being appropriated by individuals with special interests. So while there are groups successful in doing independent research, e.g. Ginkgo Bioworks (Turan, 2016), there are also in rising numbers those who claim to be a source of information, but offer mostly misrepresentations and lies, e.g. Breitbart (Toosi, 2016). From an STS perspective, information liberation is broadly perceived as a positive trend, but for me, there is also a real need to mitigate the negative externalities that come with it; namely the emphasis on shock, volume and repetition over factuality. This raises the question of how science, the ultimate source of facts, can strengthen its legitimacy as a knowledge source in the current social context described by many as the ‘post-truth era’. My experience at the conference helped me to rethink the relationship between science and society, and based on sessions I attended, I have formulated three questions to consider for the improvement of the relationship: ‘Could we use museums as a platform for more direct engagement with science?’; ‘Could we improve science communication practices by a careful inclusion of lay knowledge?’; ‘How can open data practices contribute to the transparency of science?’

Objects of scientific interest are complex. They do not yield well to simplifications, and significant effort is required to understand even the best scientific explanations. This means that not all platforms which garner wide audiences are suited for discussing objects of scientific study. However, the fourth session of the Science Communication track showed how museums can provide such a platform, and how lay knowledge can be integrated to improve science communication.

Imagine museums as agoras of the present. On top of exhibiting objects, we could use them as places of public consultation, says Dr Belen Laspra (2016) who contemplates the challenges of promoting sceptical attitudes toward science. In our science community, we are naturally sceptical of all research, while understanding that this does not equal to distrust of scientific method. However, conflation of the two might lead to dislike of science in general. Therefore, I wonder if including people in the scientific process could correct this conflation? And if museums could be places to do that? Take for an example biodiversity, a topic of choice of Prof Alan Richardson (2016). His presentation on the Beaty Biodiversity Museum at the University of British Columbia nicely described the struggles of communicating complicated objects. When an object is so inherently systematic and contextual, how to best explain it? And going a step further, how to best enable people to engage with the process of knowledge creation in which these objects are embedded? Perhaps, museums could fulfil this exact role. And as Laspra argues, build capacity to think. I very much liked this idea, as I would certainly love to see more ‘STS citizens’ – distrustful engagers, loyal sceptics – people who Dr Laspra calls ‘much (risk) – much (benefit).’ By bringing the intricacies of science closer to people, we could facilitate the rise of the sceptical citizen who is engaged with science and its process, and improve trust in science as a source of knowledge.

In addition, and given the dominant deficit model of communication, more and better appreciation of lay knowledge could improve society’s relationship with science. However, Mr John Lunsford argued in his presentation (2016) that inappropriate usage of lay knowledge might be just as bad as the deficit model. One of the problems, he says, is that our communication practices are developed for high-income countries. For example, concepts such as technology, capital and democracy are usually implied, which would be the wrong approach for low to middle income countries. The lack of appreciation of cultural differences when communicating about science might lead to serious tensions between science and society. For instance, it could mean that people are asked to choose between science and their cultural practice, or that adoption of western practices becomes a tool for imperialism. According to Mr Lunsford, however, lay knowledge is a ‘flexible tool,’ and in his research it allowed to adapt communication to local practices. In my work looking at the communication practices aimed at pro-homeopathy groups, I saw a fierce disapproval of any lay knowledge as one of the main reasons for rejection of ‘scientifically correct advices’ in favour of homeopathic advices, which were but presented by people who first listened to and engaged with one’s lived experiences. In conclusion, including lay knowledge in our communications practices might be of a great benefit, or even a necessity in reaching certain parts of society, but its application must be carefully considered first, lest we deform it into yet another form of deficit model.

Despite talking about these issues in isolation, neither museums nor lay knowledge exist in a vacuum. Figure 1 captures this, and other relations, very nicely in a complex ‘sphere of science communication.’ While individual elements do have influence by themselves, their value is best realised in the connections they make with other elements of the sphere (system). In addition, we might also see that science-society relationship is not a simple issue, but rather a part of a system, and that it materialises across multiple relations, such as museums-public discourse, journals-news media, or lab/field work-general books. This visualisation enables me to do three things. First, validate issues that I brought up as relevant to the science-society relationship. Second, contextualise the issues to identify mutual dependencies. Third, given dependencies and relevancy, approach these issues with appropriate appreciation of complexity and with the appropriate resources. Ultimately, this allows us to create a framework for improving the science-society relationship, given the focus on museums and lay knowledge.

Good communication of science and good science research are two sides of the same coin. One without the other will always achieve only mediocre results, if any at all. As such, my passion for science communication dictates me to be interested in issues around scientific method as well. One of the current hot topics is replicability of research and open data. Could being more open improve how science is done? The track on Open Data posed this very question, and its third session laid out the idea that open data might not help with the ‘reproducibility crisis’.

The limits of data sharing were portrayed by Dr Theresa Velden (2016) who categorised replication practices into four categories: local replication by originator; external verification by independent group; test of robustness by conceptual application; and generalization by extending the domain of validity. She argues that it are the last two categories that are the most important, but which also do not require data sharing. So while open data might improve verifiability of the research in itself, it should not be the focus of replication practices. At the same time, Dr Velden points out that data sharing is not just a technical issue, as it is very much a relational practice. This is important since it clarifies that even with sufficient resources, we will not likely achieve a higher standard of open data. The same sentiment was reiterated by a presentation on ‘Epistemic and Non-Epistemic values driving data-sharing’ (Murtagh et al., 2016). Tensions such as competition vs collaboration and open science vs secrecy and scientific competition force researchers into certain types of behaviour. It neither helps that we are all constantly being reminded of the ‘publish or perish’ mantra. Open data might therefore not be the simple solution to the ‘reproducibility crisis’ some believe it to be, as it does not serve the more important aspects of reproducibility, and it is interwoven with deeply rooted practices of the science profession that stimulate secrecy. Does this mean we should give up on open data and data sharing? Definitely not, but from the perspective of science-society relationship, open data should probably not be the centre of our attention.

The take away from Barcelona

Between sangria at the opening ceremony and great discussions at the beach bar with a beer in hand, I had an amazing time engaging with interesting research. I could not ask for more, and my first conference gave me enough courage, and some constructive criticism too, to enable me to advance my research further.

So what’s next for me? In connection to my passion, my frame of reference at the conference was the relationship between science and society. What I experienced was a mix of exploration of the current trends and identifications of problems of contemporary approaches. Daring, but sound, thoughts were the currency, and the environment facilitated open-mindedness rather than harsh criticism. What I picked up were ideas about science communication and scientific method. Four days of conference left me with these three questions:

Will they turn out to be good research questions? I do not know, but I am confident enough to place them at the forefront of my next academic endeavours. And in case you have similar interests, I would encourage you to consider these questions as well.

Laspra B (2016) Museums and the challenge of promoting sceptical attitudes toward science. Barcelona, Spain, 31 August – 3 September 2016. Abstract retrieved from http://www.nomadit.co.uk/easst/easst_4s2016/panels.php5?PanelID=3914.

Lewenstein BV (2011) Experimenting with Engagement: Commentary on: Taking our own medicine: on an experiment in science communication. Science and Engineering Ethics 17(4): 817–821. 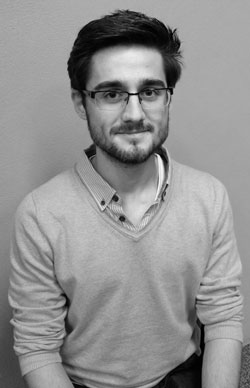 Michal Stevove is an undergraduate student of Arts & Sciences programme at University College London. He focuses his studies on science communication and business, exploring the ways in which science could improve its relationship with society. At the moment, Michal is spending a year at McGill University, Montreal, hoping to better understand how people decide, through a selection of psychology and management courses. His current research looked at communication practices of pro and anti-science groups in Slovakia and Czech Republic.