The laboratory started in 2004, when Stefan Beck and Michi Knecht together with Jörg Niewöhner initiated the “Collaboratory Social Anthropology & Life Sciences” at the Institute of European Ethnology1 at Humboldt-Universität zu Berlin. The notion of the Collaboratory was adopted from a group of anthropologists around Paul Rabinow in Berkeley (Stavrianakis 2009), with whom Stefan Beck had stayed as an assistant professor in 2000. The term is meant to signal a more epistemically focused relationship between ethnography and its interlocutors. “Damn, I also want to save lives!” Stefan Beck quipped back then and so we started to look for ways to elaborate the intersection of critical medical anthropology and science and technology studies beyond its established mode of deconstruction. This effort rested on three commitments: thinking and working across individual projects for the sake of developing empirically grounded middle-range concepts and methodologies; placing knowledge making practices of science and technology centre-stage in anthropological inquiry; and collaborating with members of the fields we explore. When the Collaboratory started, science and technology studies (STS) – though of course well established internationally – had arrived neither in the discipline(s) at large2 nor in our department in particular.

One of the first efforts to establish a different relationship with biomedicine and the life sciences took shape through the research cluster “Preventive Self” funded by the German government. Here, social inquiry including history worked in close connection with general medicine to better understand cardiovascular risk, obesity and prevention efforts as a set of practices giving rise to a new form of self-care and self-management. Inspired by recent thinking on the multiplicity of the body (Mol 2002), we built on Foucauldian analyses of biopower and technologies of the self. Moving ethnographic analyses right into the heart of medical practices emphasized their ambivalences and contingencies and allowed us to address another politics of life as such (Fassin 2009). In this first phase (2004-2010), we tried to better understand the intricate entanglement of nature and culture as well as technology and ‘the social’, which led us to explore ‘practice theory’ and material semiotics. Building on Pierre Bourdieu, Sally Falk Moore, Anthony Giddens, and Tim Ingold, among others, we grappled in our ethnographic encounters and research puzzles with the insights feminist science studies and (post) actor-network theory had to offer. Connecting ethnographic research, practice theories and collaboration was our way of translating the shift from matters of critique to matters of concern (Latour 2004) into actual research practice (Environment and Relations 2019a, b). By that time, the lab was beginning to develop its format, which it retains until today: weekly meetings during term time to discuss our own ethnographic material, read about and debate theoretical concepts, write together, invite guests and host visitors.

This format quickly began to attract masters and graduate students as well as postdocs and staff from the Institute of European Ethnology as well as from other Berlin-based institutions and beyond. It began to succeed in bringing together researchers from different stages in their careers working on an increasingly wide range of topics in a work-in-progress format. In 2007, this formatwas adopted for the entire institute in order to create an institutional structure based less on professorships and status hierarchies. Laboratories became open and experimental workspaces along particular perspectives, within which students, postdocs and staff engaged in order to develop a shared set of intellectual practices. The Collaboratory became the “Laboratory: Social Anthropology of Science and Technology”.

In its second phase (2008-2015), the Laboratory shaped its profile through a number of research projects that continued collaboration with the life sciences: particularly with molecular biology and the social and cultural neurosciences. In 2010, the lab implemented a specialization in Science and Technology Studies in our department’s Master program and published an edited introductory volume to the social anthropology of science and technology in German (Beck, Niewöhner, and Sørensen 2012). It also launched a very productive and extensive research collaboration with social psychiatry that continues until today shaped first and foremost by Stefan Beck, Martina Klausner, Milena Bister, Patrick Bieler, Christine Schmid, and Jörg Niewöhner as well as Sebastian von Peter and Manfred Zaumseil on the psychiatric / psychological side. It started off with the ethnographic project “The Production of Chronicity in Mental Healthcare and Research in Berlin” that was funded by the German research foundation despite having co-applicants from psychiatry on the proposal and thus breaking with the tradition of disciplinary social inquiry and critical distance. This research context quickly produced new collaborative formats that inspired conceptual work (choreography, doing presence, niching) and expanded ethnographic methods (longitudinal ethnographic work and mobile methods such as go-alongs). We started to discuss the specificities of collaboration with social psychiatry: How does it differ from general medicine, molecular biology and the neurosciences? Within social psychiatry, we did not exclusively collaborate with academic colleagues that had their own research interests and agendas, but additionally with professionals and practitioners who aimed at reflecting upon and intervening into existing treatment practices. Our research was constantly put to the test of whether or not it offered meaningful results to the places we explored (clinical wards, a day hospital, community care facilities). Hence our interpretations were incessantly challenged by established epistemic practices within the field. Without necessarily sharing goals and moral values with our collaboration partners, our anthropological analysis and ethnographic theorizing substantially benefited from the tensions that arose from engaging with (not appealing to!) different audiences and epistemic cultures. This research trajectory has culminated in conceptualizing our work as co-laborative (with the hyphen), i.e. “temporary, non-teleological, joint epistemic work aimed at producing disciplinary reflexivities, not interdisciplinary shared outcomes.” (Niewöhner 2016, 3) By doing so, we foreground that co-laboration differs from interdisciplinarity in significant ways: Co-laboration includes joint work with experts from various fields without limiting itself to collaboration with scientists or academics. It enables the partners to work jointly on the basis of shared objects of concern without necessarily aiming for a common goal. In a nutshell, co-laboration acknowledges the heterogeneity of existing knowledge practices. It draws on the generative potential that arises from reading different communities of practice through each other (diffraction), rather than reflecting on one from the standpoint of the other. Today, we are still enrolled in inventing formats of laboring together with partners in our current projects, which include participants within (mental) health care settings, but also reach beyond the medical field into areas of (urban) policy making, agricultural production, or business organizations, to give but a few examples. Involving respective community members in ethnographic inquiry while it is still unfolding significantly impacts the ways in which we approach and craft anthropological concepts and problematizations.

In spring 2015, the lab was forced to enter its current third phase under tragic circumstances. The unexpected and sudden death of Stefan Beck shook our group to the core. He left us in the midst of a number of projects, plans and ideas. In getting to grips with this loss, it became clear to us how deeply our thinking has been informed and challenged by Stefan’s way of doing ethnography – not in the sense of an academic ‘school’, but in the way he constantly confronted thought styles, which were at risk of becoming (too) settled, through making unorthodox connections. It took us a long time to find our way into a new rhythm and we continue to miss his most ‘irritating’ presence every day.

For the lab, this meant that Jörg Niewöhner stepped in as head and a handful of postdocs and PhD-students assisted in organizing our meetings and ensuring a continuity in discussion and planning. Continuing Stefan’s approach of a relational anthropology (Beck 2008), our group tied the last discussions with Stefan together to develop the notion of “phenomenography”, i.e. the ethnographic inquiry into ecologies of experience and expertise in relation to the material-semiotic practices that bring them about. (Niewöhner et al. 2016) We define phenomenography as an inherently co-laborative research practice, which aims at curating concepts jointly and by doing so re-articulating reflexivity within anthropology. The fact that Jörg took over the chair in Social Anthropology of Human-Environment relations at the Institute of European Ethnology and became director of the Integrative Research Institute on Transformations of Human-Environment Systems (IRI THESys) at Humboldt-Universität zu Berlin, affirmed our group’s ecological approach on anthropological, political, and geographical issues. Over time, the Lab also became home to scholars eager to explore the entanglements of social practices and material worlds in the Anthropocene. In these last three years, our department also attracted new staff with an explicit expertise in STS (e. g. Tahani Nadim, Ignacio Farias). This happy proliferation of STS inspired ethnographic research widened our scope beyond a single STS umbrella.

Hence in 2018, we marked the beginning of this new phase by giving our group its current name “Laboratory: Anthropology of Environment | Human Relations”. Why such an awkward name, you may ask: Human-Environment relations or interactions is a term largely occupied with ecological and systemic thinking in the biological and human sciences. While we co-laborate with these thought styles, we are keen to explore ethnographically how these relations are enacted rather than assuming them within a particular epistemological position. We also want to emphasize the environment to avoid its reduction to symbol or metaphor. (Niewöhner and Lock 2018) The vertical bar ‘|’ marks our inquiry into an open, dynamic as well as often ambivalent and excessive relationship. We take our cue here from Stefan Beck’s inaugural lecture entitled “Nature | Culture: Thoughts on a relational anthropology” (Beck 2008). ‘Relations’ summons elective affinities including Gregory Bateson, Marilyn Strathern, Stefan Beck, Annemarie Mol, to name but a few with a lifelong interest in relentlessly relational research and thought. We see our approach within the broad and multi-facetted tradition of social and cultural anthropology, including its German-speaking strand of European Ethnology. We have dropped the ‘social and cultural’ to reference our background in science and technology studies, the material turn and our understanding of ‘the social’ as always already entangled with environments, artefacts, infrastructures and bodies.

Somewhat ironically for a contribution to the EASST review, ‘science and technology studies’ has disappeared from our group’s name. This is not accidental and only partly explained through the institutional developments described above. While we remain deeply committed to the last 40 years of excellent scholarship in STS, we note that the success and growth of the inter-discipline also raises some important questions. Most importantly, perhaps, the question how STS can rekindle the productive friction with its disciplinary kin that has been key to its development.

2 In Germany, neither European Ethnology nor its sister discipline of Social and Cultural Anthropology had really taken note of the first two waves of STS with the notable exception of Richard Rottenburg and his group at the Max Planck Institute for Social Anthropology in Halle.

Laboratory: Anthropology of Environment|Human Relations, eds. 2019a. After Practice. Thinking through Matter(s) and Meaning Relationally. Volume I. Berlin: Panama.

Stavrianakis, Anthony. 2009. What is an Anthropology of the Contemporary? Field Statement (Concept Labor), no. 1, April 2009. 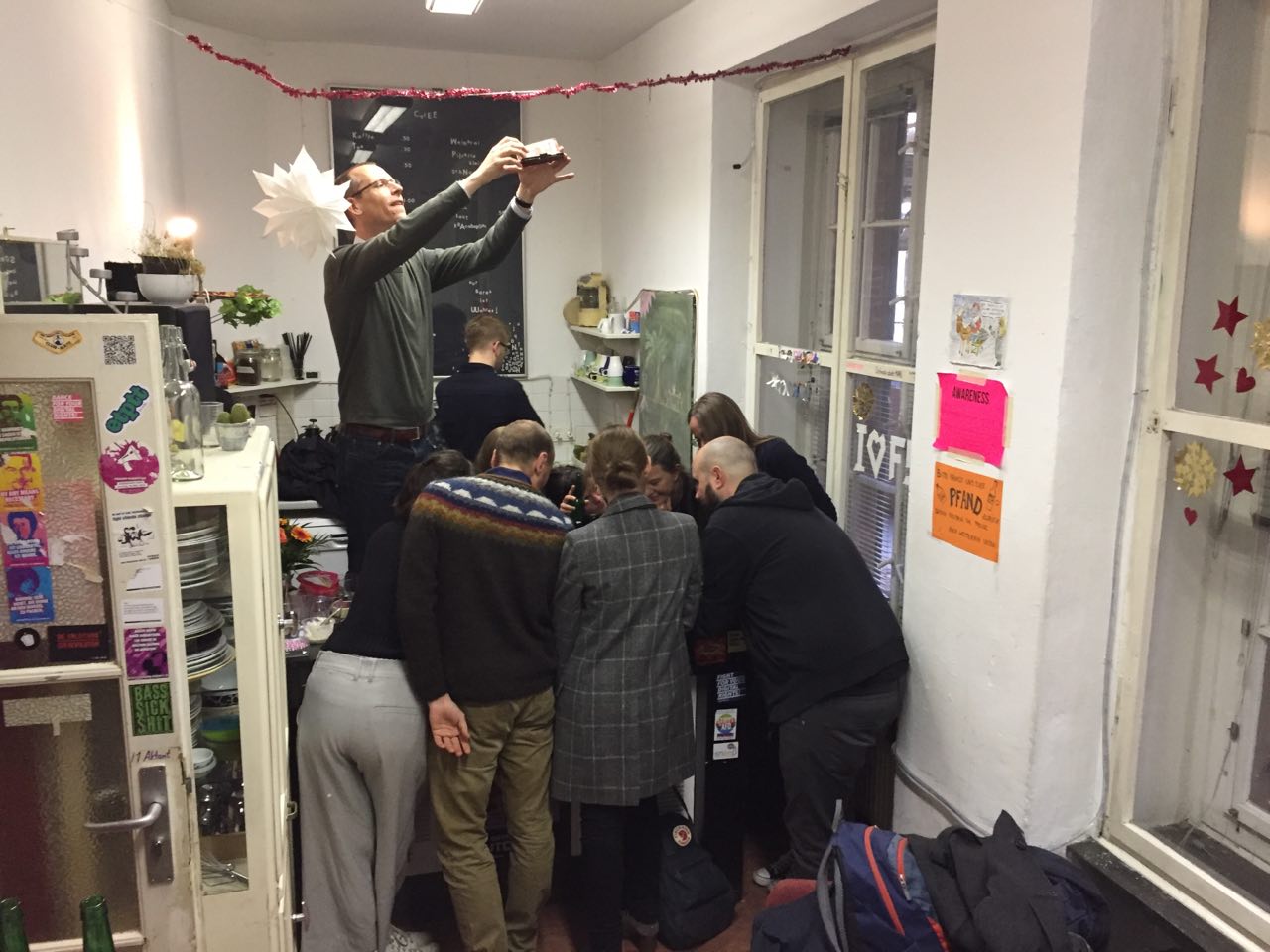