How to inherit from ‘this’ intervention? This was the question that Lucy Suchman posed in the plenary session with Isabelle Stengers, as she reported on the subplenary session discussing the future of academia in the neoliberalizing institutional environments STS scholars currently work. What to do with the powerful propositions for abolishing authorship, resisting quantification, rethinking academic work? How to make them productive, generative? How to keep them alive, make them public?

In these notes, I would like extend Lucy’s question and ask how to inherit from the intervention that the 4S/EASST conference in Barcelona made (or aimed to make) in the field of STS – an epistemo-political question that takes the form of both, a public recognition of the powerful conceptual proposition made by the local organizing committee through their careful curating of the plenary and subplenary sessions and, most importantly, an invitation to the STS community to engage with such proposition, to inherit from the conference as a situation that provokes thinking.

What did the Barcelona conference stand for? What was the intellectual intervention?

I think the most interesting proposition was not the conference’s motto ‘Science and technology by other means’, which directed attention to multiple engagements with science and technology by “private not-for-profit actors, such as CSOs, patient organizations and new citizens’ collectives”, and how these are “forging routes to explore more democratic and hospitable futures in the times of care, housing, food, financial and environmental crisis”. These questions reflect concerns that have shaped STS’s ethico-political engagements since at least the late 1980s. Thus what the Barcelona conference motto did was to stress this set of concerns as the common ground for any field-wide conversation.

Beyond this, the Barcelona conference entailed a different, perhaps more-subtle, but also more powerful proposition concerning the voices, alliances and visibilities that STS needs to position itself vis a vis the current neoliberalizing/anthropocenic/post-truth situation. The key here, I think, was to highlight the contribution of feminist technoscience studies as not simply one important tradition in STS, but as a critical source to rethink the whole field of STS as a feminist project. All plenary and subplenary sessions, I felt, were carefully attuned to the feminist invitations of thinking with, against and alongside technoscience, reimagining STS as a collaborative endeavour with collectives committed to making visible, and experimenting with other forms of not just science and technology, but of life together. The figure of ‘community by other means’, which emerged in the conversation of Michele Murphy and Madelaine Akrich, grasped very well the spirit of these conversations.

In the same vein, the Barcelona conference gave prominence to current articulations of STS and anthropological modes of thinking and researching. Let me clarify this: this wasn’t about re-invoking the capacities of ethnographic methods for studying science and technology or warning us to not lose sight of humans when studying complex techno-scientific projects and infrastructures. The conference’s recourse to anthropology expressed itself in the invitation to embrace the possibility of refiguring inquiry as a form of collaborative enterprise with STS’ various interlocutors; collaborations that are not only a matter of ethico-political commitments, but also of theorico-conceptual reflexivity.

When I paraphrase Lucy Suchman paraphrasing Isabelle Stengers to ask how to inherit from Barcelona, I don’t want to suggest that the local organizing committee’s programmatic intervention would be the ‘right’ agenda both in academic and political terms for the future of STS. But, more modestly, to simply point out that what we encounter here are propositions that could help us to collectively think about the future of STS as an intellectual practice.

Speaking of which I cannot fail to mention the wicked politics of conference-making.

Barcelona was the first conference organised or co-organised by EASST to be held in a conference centre. There were many good reasons why this came to be the case. The most obvious one was the sheer number of participants (around 2000) and the need to delegate some organizational tasks to professional service providers. However, I think there are also good reasons for maintaining the tradition of university-based conferences. To begin with, this could allow us to not subject our conferencing practices to the surveillance of a security apparatus and to counteract their commoditization up to the last drop of water. University-based conferences, I think, give local organizing committees and the associations involved more leeway over otherwise black-boxed issues, such as what is technically possible, what is economically viable, what is environmentally sustainable, etc.

But, beyond this, university settings are also crucial to situate our knowing and conferencing practices differently. To not encounter each other as academic tourists in global non-places close to a sunny beach, but to attach ourselves to local settings of knowledge production. Whether this type of university-based conferences could continue under the current model of joint mega conferences is an open question. The Barcelona conference managed to at least partially square the circle by organizing a program of parallel activities that took at least some of the conference participants in some critical places of local knowledge production and contestation, such as the visual arts research centre Hangar or the Museum of Design. But it probably requires more than parallel activities in order to practice conferences as learning devices that situate participants in local settings of STS production. 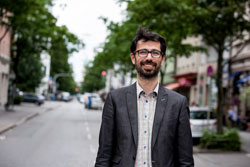 Ignacio Farías is assistant professor at the Munich Center for Technology in Society and the Department of Architecture of the Technical University of Munich. His most recent work explores the politics of urban environmental disruptions associated to tsunamis, the heat-island effect and environmental noise, as well as the challenges of technical democratization, especially in the context of smart city projects. He is the editor of EASST Review.