The concept of ‘crisis’ has become a central interpretative frame for explaining social changes in contemporary societies, which is also visible in the proliferation of “crisis talk”. The omnipresence of the concept has also provoked critical commentaries from scholars, who have contested its usefulness as an analytical concept (e.g. Roitman 2014). For the EASST 2022 Conference, my colleague Alexandra Ciocanel and I proposed a panel asking whether “crisis has run out of steam”, seeking to explore temporal and affective qualities of “crisis talk”.  A central idea behind the panel was that paying attention to such qualities of crisis talk might help us better understand why certain kind of information comes or fails “to matter” (Latour 2004), shedding light to the stakes of contestations.

The presentations in the panel explored crises of various kinds – environmental, political and economic – through different qualitative methodological approaches. One of the central themes of the panel was climate change skepticism. In her presentation, Alexandra Ciocanel pointed to the importance to paying attention to affect and emotions when examining whether climate change comes to matter by discussing optimism and pessimism as affective dispositions. In so doing, she argued that scientific debates about “matters of fact” concerning climate change are also debates “about meaning, ethics, and morality”. Monica Marin’s presentation about climate change media discourses built on similar insights, pointing to the intertwined nature of temporal and affective work in semiotic struggles. Marin compared media content of two US publications, one considered liberal and the other conservative. She found out that “time work” and “temporal manipulations” played a central role in both, contrasting the urgency of the supporters of climate change, manifest in shorter time frames, with the geological and industrial temporalities of the denialist discourses. 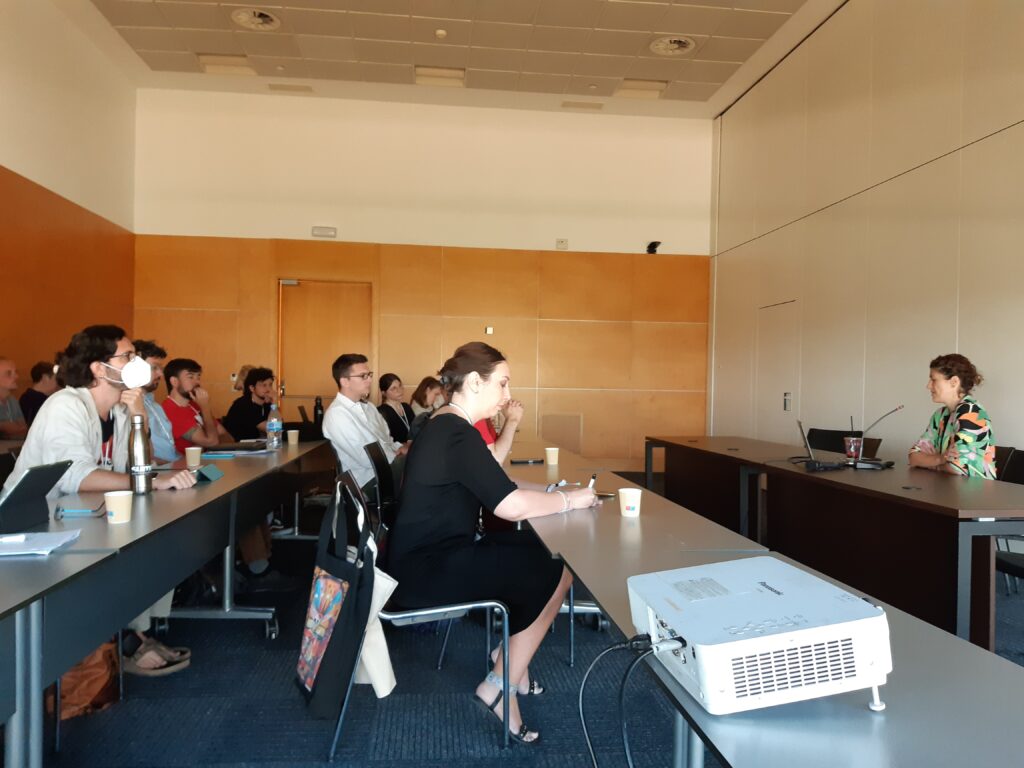 Similarly to Ciocanel, Marin showed how temporal and affective dimensions were intertwined; for example, one idea advanced by the conservative publication was the optimistic assertion that technological advancement would enable humans to tackle environmental challenges. In their focus on time and affect – including pessimism and optimism – these two presentations evoked interesting questions about the ways in which the ongoing climate crisis challenges the idea of progress, which is central for both modern science and state, and transcends the liberal-conservative divide. By challenging the linear narrative of progress – or at least central components of what it involves – climate change strongly connects to what some scholars have termed the ongoing crisis of political imagination in late liberalism (Razsa 2015). If it’s easier to imagine the destruction of the earth than the end of capitalism, as Jameson has suggested (1994, xii), are optimism and long-term timeframes really a privilege of denialist discourses?

Optimism and pessimism are both future-oriented orientations, which relate to expectations. However, Rebecca Bryant (2016) has argued that “a particular sense of present-ness produced by futures that cannot be anticipated” (2016, 19) is exactly what defines a time of crisis among our interlocutors. Théo Régniez’s presentation addressed this uncertainty about the future from the perspective of knowledge producers, more specifically, economic forecasters in France. Régniez elaborated how his interlocutors were well aware of the inherent uncertainties and high probability of failure in economic forecasting in the midst of a financial crisis. Consequently, Régniez elaborated on an ethnographic distinction his interlocutors made between “understanding” and “explaining”: during financial crisis, they were unable to “understand” the situation but still able to “explain” it.  Thus, Régniez argued that during the crisis, the story-telling aspect of forecasting, which was also present during “regular” times, took on a new dimension.

In my presentation, I dealt with a similar tension concerning temporal aspects of discerning “truth”. I showed how my scientist-interlocutors in Western Siberia manifested a general skepticism towards claims of “global crisis”, manifest in their doubts concerning the seriousness of anthropogenic climate change and Covid-19 pandemic. I suggested that in their doubts, my interlocutors were drawing from a culturally specific epistemology of truth, according to which scientists were understood to be dealing with the eternal, metaphysical truths of nature, independent of human cognition. In expressing their doubts, I argued, they presented a critique of the politico-economy of knowledge production in both media and academia, which they viewed was susceptible to political and economic manipulations. They considered that truth was often impossible to discern in the current moment and prolonged into the distant future, producing a certain kind of temporality of discovering truth, which could be considered antithetical to premature announcements of crisis.

My interlocutors’ reservations about claims of crisis point to the way in which claims of crisis can act as a powerful tool of political manipulation. José David Gómez-Urrego’s presentation dealt with the use of crisis as a political resource through the kind of radical rupture of expectations declaration of crisis enables. He elaborated this through an account of ‘Yachay city of knowledge’ in Ecuador – a high-profile, vast investment project advanced by the country’s long-term president Rafael Correa. In his presentation, Gómez-Urrego shows how in a matter of days Yachay went from “the most important private investment in the history of the country” to “a farce”. Gómez-Urrego argues that this radical change came about when the new president Lenín Moreno and his administration declared a crisis, reframing the last decade of Ecuadorian politics and questioning the previous government’s narrative of improvement. This, Gómez-Urrego argues, enabled destroying the long-term time horizons, which had justified the vast investments to Yachay, and abandoning the project as a failure.

Further, the presentation by Christian Colella and his colleagues addressed contestations around problem setting during a declared environmental crisis. Their case study concerned the detection of Xylella fastidiosa bacteria in Puglia in Italy, which threatened the region’s famous olive trees, which became hosts for the bacteria. Colella et al’s presentation elaborates the different framings of problem setting; the first one, advanced by EU bodies, focused on the pathogen as the cause of the trouble and advocated eradicating the infected trees as a solution to the problem, insisting on the urgency of this effort. The second approach, advanced by political and social movements in the region, argued for a more holistic and contextualized approach, seeking to address the decline of the olive trees instead of focusing on the bacteria, and questioning the “state of emergency”. Importantly, Colella et al’s presentation showed how the ways in which framing the problem as “crisis” also affects the ways in which potential solutions were understood.

Overall, the presentations in the panel shed light on the ways in which attention to the affective and temporal dimensions of crisis talk can help us understand contestations around different kinds of crises and their stakes.  For example, the idea that “the problem” of climate change skepticism can be simply solved by providing the “right” kind of information, is if we understand that people’s evaluations of knowledge claims involve much more than the “logical operations of falsification, verification, and probability attribution” (2018, 169), as Mathijs Pelkmans points out. Further, the presentations also reminded us of the importance of carefully contextualizing our case studies and remaining sensitive to the power dynamics underlying both claims and contestations of crisis.

Roosa Rytkönen is a PhD researcher in Social Anthropology at the University of Manchester and has worked with natural scientists and environmental activists in Western Siberia. Her PhD project studies how her interlocutors navigate the challenging information environment of contemporary Russia, evaluating competing knowledge claims and trying to discern truth.