I am an art-based researcher but have attended numerous STS conferences since starting my practice-based PhD, feeling welcome and very much at home at these events. The EASST 2022 meeting in Madrid has been by far the biggest—and most expensive—out of them. I wouldn`t have been able to attend, had I not been granted a fee waiver to participate. I had never been to Spain before and was truly grateful for the opportunity—looking forward to coming and learning more about Madrid and the work of Spanish STS researchers. Here are some of my memories of the conference that I would like to share.

Attending STS conferences is for me not only an opportunity to share my research with like-minded researchers but also an important part of my research practice examining the potential of artistic research to decolonize academic knowledge production (see Veselá 2021). Learning from STS researchers and initiating and facilitating collaborations and partnerships between STS and art-based researchers is a crucial part of my activities seeking to examine and engage practices to counter colonial and/or uncaring practices in academia and beyond. With regard to my research interest in the knowledge and expertise exchange between art-based and STS researchers, the EASST conference in Madrid did not disappoint. I was excited to find out that a number of the conference participants were art-based researchers or STS researchers who either collaborated with artists or developed artistic practice of their own as part of their research work. Moreover, I was happy to learn that in both the panel “Making Livable Worlds Through Reflexive Methods: Care and Intervention in STS Research,” in which I presented, and in other panels, participants were interested in situated and reflexive approaches, as well as working collaboratively, affectively, and in a socially aware and engaged fashion. And finally, the well-attended and truly fascinating science-fiction sub-plenary session “Techno-Science-Fictional Futures: Methods, Forms, Norms,” which closed the second day of the conference, reminded everyone of the importance to think and imagine beyond the present-day status quo. Stimulating our collective imagination through the engagement with speculative, poetic, literary, and artistic visions of the future, the sub-plenary showed, is a vital tool helping us to devise and consider alternative modes of resistance and world-making for/in troubled times.

All in all, I am pleased to report that all the presentations and panels that I attended during my three days at the conference were, without exception, incredibly captivating. I was in awe of the speakers` expertise and passion, yearning to know more about them and the work they presented. Which brings me to more critical comments on the conference and the experience it offered. With more than 800 papers squeezed into three and a half days, the packed schedule didn`t allow for more than one or two “quick questions” after each of the presentations. Panel after panel was brought to an abrupt end, leaving presenters without proper feedback and disappointing those participants who, like me, were saddened that the panel discussion had to end before it could have properly started. A broader debate about the smaller and slower alternatives to a massive conference model adopted by the conference in Madrid, with more in-depth and valuable experience offered to its participants, is therefore truly necessary.

The immense size of the conference also meant that it couldn`t be hosted by any of the universities in Madrid but was instead held at IFEMA, one of the most important centers in Europe within the international circuit of the fair and congress industry. Hosting a conference in a commercial space designated for organizing large-scale events was reflected not only in a rather cold and businesslike character of the venue but also in the increased registration fees and the higher costs of lunches offered to attendees. The IFEMA convention center was close to the Madrid-Barajas Adolfo Suárez airport but almost 10 kilometers away from the city center where I was accommodated in a small hostel located in one of the old but charming apartment buildings, just a stone`s throw from the Plazza Major. In the evenings, I was wandering around the streets of central Madrid, absorbing its energy. The conference dates coincided with MADO Madrid Orgullo 2022—Madrid Pride Festival—which brought an extra portion of vibrancy to the city. After two years of Covid-related restrictions, more than half a million participants flooded the Spanish capital, marching, singing, and dancing in protest and celebration. The ecstatic energy of boiling-hot Madrid during those days stood in stark contrast to the impersonal, heavily air-conditioned conference rooms of the IFEMA. Moreover, the diversity of the people of all ages and various backgrounds enjoying the festivities contrasted with the lack of diversity among the almost 1000 participants gathered at the conference, bringing even more of my attention to this regrettable oversight.

I was not the only one who noticed this lack of diversity which included a low participation of local STS researchers. Shouldn`t a conference hosted by a discipline committed to critical examination of the practices and consequences of science and technology in its historical, cultural, and social contexts pay more critical attention to its own inner workings? Shouldn`t it be a priority for such a discipline to be mindful to include participants from diverse and marginalized communities at its meetings? And shouldn’t be one of the primary goals of an STS event hosted in Madrid to celebrate the work of Spanish researchers and to strengthen and broaden their research networks?

In the near absence of local members of the STS community (aside from the Local committee of EASST 2022 Madrid), the choice of conference venue in Madrid raised questions, not least because of the carbon dioxide emissions from air travel undertaken by most of its attendees. In the context of the current climate crisis, indeed, questions arise of whether the large-scale international meetings should be held at all. A profound, systemic shift to more sustainable conference ecologies is, in my opinion, inevitable. And while I feel it is important to stay in touch and engage in broader debate with researchers working in different regions of the world, learning to mitigate climate impacts of coming together should be a priority. Making use of hybrid formats combining face-to-face communication with digital networking or building regional networks and convening smaller regional meetings that allow for more peer interaction, discussion, and learning, for example, can facilitate rewarding conference experience without large emissions.1

I would like to conclude my argument for smaller and cheaper, more regional and sustainable conferences run at a slower and more attentive pace, by sharing some thoughts brought about by a health struggle I encountered during my time at the conference. For some ten years, I have been living with migraines. During this time, I have learned to live better with them—by maintaining a healthier lifestyle and avoiding potential triggers. Heavily air-conditioned rooms were problematic in this regard and, indeed, caused a mild headache which kept growing stronger each day. Worried that the headache could have developed into a full-blown migraine, I decided to skip the last day of the conference. Still, I suffered a migraine-related seizure on my way home which left me incapacitated and scared in the middle of the crowd, unable to see or hear for a couple of long minutes. I am not sharing this to blame the conference organizers for a personal health scare the conference environment might have contributed to, but because it made me think about the size of the conference in relation to health and well-being of its participants. A smaller conference, perhaps, would not have required so much air conditioning to keep attendees alert and to prevent the growth and development of germs and bacteria spreading easily in crowded enclosed spaces. Even more crucially, a smaller conference would have made it possible to slow down a bit, ask participants how they were feeling, and make arrangements to keep everyone happy. In this way, smaller conferences are more likely to be considerate not only of the health of the planet but also of its very participants.

1 Recent workshop “Science and technology studies in context: Provincialising STS from Central Europe” held at Vienna reviewed in the next issue can be named as an inspiring example. 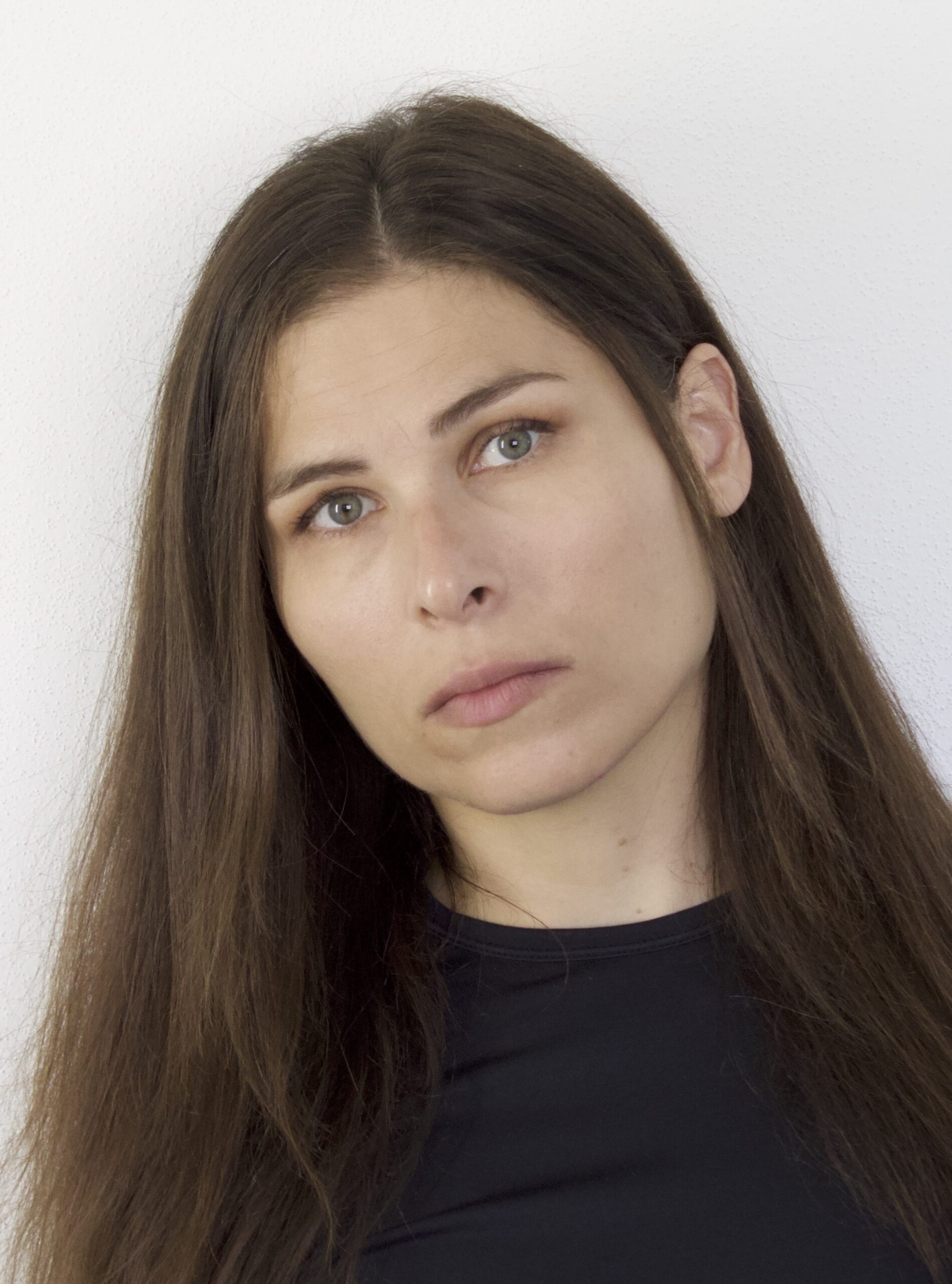 Lenka Veselá is a PhD researcher at the Department of Theory and History of Art at the Faculty of Fine Arts in Brno, Czech Republic. Her art-based research practice concerns “synthetic bodies” (bodies emerging by synthesis—interconnected with and dependent on the broader collectivity of human and nonhuman life that exists within a shared environment) and “synthetic bodies of knowledges” (knowledges synthesized across multiple sites). She is a lecturer, organizer, and feminist thinker advocating for inclusive forms of transdisciplinary knowledge production.