Public problems and controversies usually refer to two traditions of social sciences. The first one focuses on processes through which private issues transform into collective concerns and raise interest among politicians. Its most classical case studies include civil rights or environmental issues. The second tradition refers to conflicts related to science and technology in society. It underlines the role of scientific reasoning on highly debated topics such as nuclear waste or big data. I argue that the two research perspectives, as different as they are, could gain in analytical depth and precision from one another. My paper is an attempt to illustrate this through some research projects developed over the past ten years on traffic safety and smart cities in France and the United States.

From controversy to public problem: a struggle for political order

What is wrong with traffic safety statistics? The question seems legitimate for anyone who reads for the first time the statistical form used by state officials to report accidents in France. Indeed, every possible characteristic of the crash appears recordable and accessible in a standardized format, from age and sex of the driver to profession and blood alcohol concentration, date, time and place of the accident, light conditions, road design or vehicle type. Physicians, however, expressed criticism in the early years of the new millennium. More precisely, they opposed engineers in a growing dispute on data collection. Borrowing from Dorothy Nelkin (1979), I studied this controversy as a lens to reveal some hidden assumptions of scientists in the field of traffic safety. I realized that physicians asked for data on injuries, as they wanted to prevent first and foremost the most severe crashes, rather than accidents in general. State engineers, in turn, focused on roadway design to cope with what they perceived as the core structure of the problem. That was how the two groups expressed and reaffirmed some core values of their professional communities.

The study went on with a sociological analysis of the media, to understand how journalists selected their sources to write about the debate. It helped to go beyond some naïve appreciations of science and its diffusion, to emphasize precisely some specific norms and practices related to science communication (Lewenstein, 1992). More specifically, the study showed that journalists were active players in the controversy, not only as obligatory passage points for the debate, but also as tacit promoters of another viewpoint on the issue, different from that of physicians and engineers. Indeed, they draw on their day-to-day experience with the news to underline a matter of drivers’ behaviors and discipline. The words used in the press articles, as a consequence, reflected a problem of individuals, rather than of roads or vehicles, with people actually not injured or dead, but deliberately “maimed” and “killed.” Such a disciplinary stance relied on the testimony of police officers presented as the experts on the issue. This analysis helped to reveal another professional community involved in the debate, besides those of engineers and physicians, with spokespersons from state police asking for data on cell phone use or drug abuse, for instance. This contributed to set the stage for a typical study of a scientific controversy, with competing groups and professional values made visible through a public dispute.

The analysis gained depth when confronted with some classic works in sociology of public problems. In that scientific domain, traffic safety is not a minor topic of interest. It rather stands as a major theme of investigation after the publication of Joseph Gusfield’s Culture of Public Problems (1981). In his book, the sociologist investigated how a private practice, that of drinking before driving, became a public problem in the United States. His research proved seminal in many ways, as he proposed to consider as “public” an issue not only made “visible” or transformed as a matter of “collective” concern, but also developed as an “institutional” theme of interest. The approach led him to highlight the processes through which political responsibility was distributed for the cause and the treatment of problems. Indeed, even if actors may not be aware of their own conceptual biases as regard to the definition of accident, toward a question of vehicles, of roads or individuals, they all enter into a competition for some scarce public resources, to see their priorities become political (Neveu, 2015). Through that process, a plurality of possible realities tends to disappear, as only one definition of the legitimate question and its realistic answer remains in the end (Best, 1995 [1989]). To Gusfield, as a result, public problems are powerful sources of legitimization or de-legitimization of the existing political order.

This brings new light on the study of controversies related to science and technology in society. In the case of traffic safety, it helps to uncover some political programs beyond competing claims for objectivity. Physicians, for instance, had been advocating for years, long before I started fieldwork, for a reallocation of public funding to injury control, through meetings and talks in academic arenas and professional societies. Their proposal, however, faced opposition from state engineers, as they struggled to save resources for road maintenance at a time when public budgets began to shrink. They also confronted indifference, not to say resistance, from journalists intimately convinced that safety was a matter of individual discipline, to be dealt with police officers rather than physicians. The controversy on accident statistics, then, became a struggle for political visibility, to end up either with the recognition of the existing order, or with a profound reordering of traffic safety policies. Some similar processes seem to prevail in other domains of interest for science and technology scholars. As regard to nanotechnologies, for instance, Brice Laurent argues that political order is necessarily at stake, when scientific objects become a problem to be debated beyond laboratories and universities (2017). It is a sign, to me, that scholars interested in science and technology in society could find great interest in developing an in-depth dialogue with sociologists working on public problems.

From public problem to controversy: the social production of credibility

Sociologists interested in public problems, in turn, might also want to build bridges with science and technology scholars. To make it clear, I will use a case study related to so-called smart cities, on which I have had the opportunity to work on at the Ecole Nationale des Ponts et Chaussées and the Université Paris-Est Marne-la-Vallée, together with sociologists and historians of the Laboratoire Techniques, Territoires et Sociétés (LATTS, UMR 8134). “Smart cities” usually refer to the development of connected cities, where the dissemination of numerical technologies brings a series of new public and private services to enhance the citizens’ experience of urban life. Their promoters often present them as the solution to a wide variety of problems in the United States. The spread of numerical technologies, to them, would help to treat environmental issues, for instance, through real-time energy management. It could also bring security to the most insecure places, with police officers likely to access new sensors and monitoring devices. These arguments tend to draw political attention on smart cities as the solution to some highly debated issues, which, to me, make them an interesting case study for the analysis of public problems.

Who are the promoters of the smart city, and how do they manage to make it a solution to public problems? Scientists and engineers may have their word to say in the process, as science and technology seem at heart of the topic. Indeed, they could provide academic authority and legitimacy to the development of smart cities, most notably through scientific writing, to depersonalize claims and universalize projects that would otherwise be difficult to disseminate (Henry, 2017). It would seem easy to them, for instance, to play on the apparent complexity of sensors or data mining, deliberately or not, to create a hyper-technical and obscure discourse on the topic. That would be a perfect way to raise the entry cost for new comers in the debate, and make sure no strong criticism from non-scientists could develop easily, as show in other cases (Comby, 2015). I could not find any such practices, however, as regard to smart cities, which led me to search for alternative options to study scientific involvement in the field.

Back to the academic literature on controversies, I realized that scientific authority was not even central, most often, in the processes through which scientists get approval or credit from non-scientists. Scholars interested in science and technology rather emphasize a need for the engineers, for instance, to translate their claims, to rephrase and to problematize them to make them appealing outside of laboratories and universities. Scientific demonstrations, in that sense, become political, as they develop to convince a public and to attract allies for the scientists (Barry, 1999). Even in the Silicon Valley, where science and technology may seem most legitimate and unquestionable, researchers and engineers engage very frequently into public “demos” of their work and projects, not only to secure funding or get recognition, but also to coordinate and create routines to interact with non-scientists (Rosental, 2002). Scientists do not always encourage these practices. They can even resist them, depending on their academic positions and social trajectories. Most often, however, they end up adapting to the targeted public and modifying some pieces of their initial research project. Such a result is a reminder that, in many cases, scientists and non-scientists have to “co-produce” science and technology to gain technical credibility and social legitimacy (Jasanoff, 2004).

This is an interesting point to keep in mind, while investigating the interactions between scientists and city officials working on smart cities in the United States. Through interviews and field observations, indeed, I could realize that information specialists tried first, a few years ago, to impose their projects to municipal bureaucrats. As they faced resistance, however, they decided then to adapt to some of the needs of their counterparts within city councils. It led them to define a new discourse and to develop new practices on smart cities, as the solution to some specific public problems (Bernardin, 2018). The analysis echoes that of scholars interested in a broader history of urban technologies and their relation to municipal governments. To me, it comes as a confirmation that sociologists working on public problems could learn a lot from science and technology studies, to better understand the processes through which experts can gain or lose social legitimacy over time.

Lewenstein B (ed) (1992) When Science Meets the Public. Washington: American Association for the Advancement of Science. 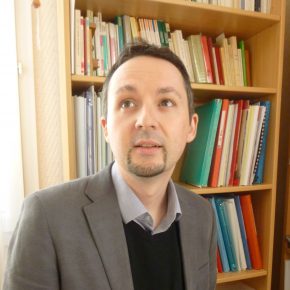 Stève Bernardin is an Associate Professor of Sociology at the Université Paris-Est Marne-la-Vallée, where he works on social issues and public problems related to the development of so-called “smart cities” and “autonomous vehicles” in France and the United States. He was a Fulbright Fellow and an Arthur Sachs Scholar in the Program on Science, Technology, and Society at the John F. Kennedy School of Government of Harvard University in 2006-2007.