For emergent doctoral researchers undertaking the process of engaging with the strange new world of academia in all its myriad complexities, what are the theoretical and social implications of undertaking a “PhD by other means”? What are the practicalities of undertaking engaged STS research that falls somewhere between theory and practice, social justice and science? Most importantly, what does it mean to draw wisdom from related communities and social movements in ways that matter?

These were but a few of the many difficult questions we came together to explore in Barcelona at the doctoral day which preceded 4S/EASST 2016 this August. Out of 100 applicants from around the world, there was only space for 50, and the backgrounds of those lucky enough to join were diverse. We came for many reasons, and left with many new insights. We discussed what it means to undertake research and writing that is hybridized and radical, situating itself in between traditional academic paradigms. We shared hands-on methods and tactics for integrating cooperative and open access principles into our research processes in ways that are just and sustainable.

What was especially significant, though, was the neighbourhood chosen by the organizers for us to share our ideas in – El Poblenou, Catalan for ‘new town’. We began with a tour of the area’s historic cooperatives and now-defunct factories, and spent the rest of our time at Hangar, an art centre and medialab in the former textile factory of Marqués de Santa Isabel. Since the 1990s, Poblenou has undergone a period of rapid transformation. Once referred to as “Catalan Manchester” due to being a centre of Foridst-era industry, in the 1990s it was marked by a period of simultaneous post-industrial decline (ie, abandoned factories) and creative renaissance, with artists re-opening abandoned buildings for workshops while local co-ops and collaborative movements grew (Marti-Costa & Pradel, 2002; Evans, 2009; Gdaniec, 2000; Tironi, 2009). At this time, various attempts were made by city governments to revitalize the neighbourhood’s rebellious reputation into something more business friendly. This included the large-scale “22@bcn” plan, which is currently in the process of transforming Poblenou into a mixed-use hub of technological and creative knowledge production, making it into a property-ownership friendly “model city” often lauded as a success story of urban revitalization (Marti-Costa & Pradel, 2002; Evans, 2009).

In today’s Poblenou, the converted lofts that once housed collective fabrication centres and squats are marketed to upscale buyers as ‘Barcelona SoHo’, a “neighbourhood where you can always get to the beach via the sunny side of the street” (Martin, 2005). Meanwhile, short-let vacation rental startup Air BnB, despite facing sharp criticism from Barcelona locals for its tendency to woo foreign attentions at the cost of local well-being (O’Sullivan, 2015), describes Poblenou to potential tourists as a place that “once resembled a scene from a sooty cyberpunk film”, until “thrill-seekers from around the world” transformed it into a “vibrant hub on the verge of ultimate esteem” (Air BnB, 2016). These glowing descriptions have not been lost on buyers with enough capital to move into the area. Marti-Costa and Pradel found that while rental prices in 1998 were €4.77 per square metre, by 2006 they had skyrocketed to €14.63 (2002). As Henri Lefebvre first wrote in The Production of Space, capitalist accumulations often draw their power from the use of selective, mediated representations like these, where a place becomes understood only as through being a reflection of the interests, ideologies and ambitions of those who carry the most power in a society (1974).

What these tourist-friendly narratives hide, however, is the fact that Poblenou’s streets also hold other histories which have emerged in struggles between long-time residents, local artists and city planners as new cultural and knowledge-based economies came to replace those of existing communities, causing the coexistence of many differing conceptions of place and identity that are still reflected today in both online and offline instances (Gdaniec, 2000; Tironi, 2009). Gdaniec explains that while the district continues to be seen as exemplary by the current city government, it is a very different place for locals. While renovations into luxury flats take place, they must “cope with major construction work, bad housing conditions, wait for new affordable housing, see the new expensive entertainment establishments, and look for jobs… effectively liv[ing] in a city within a city, and the new exclusive developments represent another city within a city” (Gdaniec, 2000: 381). As a result, various protest movements against foreign speculation such as the “Excuse me, do you know where is Poble Nou?” graffiti campaign have emerged (Tironi 2009). The conflicts of experience and identity during such place-based transitions also echo those we discussed at Hangar, trying to fathom our own existences as hybrid doctoral students situated in between home nations and nations of study, and in between worlds of science, technology, practice and research.

Perhaps this is because, as geographer Doreen Massey once put it, the spaces and places we see as unchanging are not just spaces or places but also constructs of our own sociality, as seen through ever-evolving power-geometries, histories and interrelations that are themselves full of hegemony and symbolism, “complex web[s] of relations of domination and subordination, solidarity and cooperation” (1992: 81). Poblenou’s historic factories have worn many different faces, as have their various representations, all interwoven into the complicated social fabrics that define Barcelona as a city. These faces reflect changing economic geographies and uneven, often forced gentrification. But they also reflect creative collaborations between local creatives and thinkers, and community struggles for identity in a long moment of transformation.

In the case of Hangar, it can be argued that while the replacement of local industry with creative and cultural capital does cause increased complexities and displacement, it can also foster powerful local projects that celebrate both pasts and presents in ways that value both traditional and contemporary approaches. In this way, instead of being “mere gentrifiers”, artists are “politically engaged neighbours” (Manuel, 2009: 92). By taking funding from both government and community donors, hosting free local events and drawing in creative, co-operative, socially-sensitive initiatives that combine disparate worlds of media, technology, research and fabrication, Hangar aims to help both long-time locals and international participants feel welcomed (Gdaniec, 2000; Evans; 2009). “Where they locate and draw on a manifest authenticity and inheritance of former cultural activity and production – whether symbolic or economic through a residual labour market, higher education hubs, specialist skills and locational advantages,” Graeme Evans writes in his extensive 2009 study of Hangar and other ‘creative clusters’ in Barcelona, “a more sustainable model can result… present[ing] a workable model of living quarters, rather than museumified quarters” (55).

While we, as foreign actors only briefly immersed in the complex circumstances and power-geometries of the spaces, places and histories of Poblenou, can never speak for its people, we can now speak a little bit about their struggles and draw wisdom from those experiences. We also find much inspiration for our own work as fledgling STS researchers in the merging of theory, practice and local activism seen at mixed-use community spaces like Hangar. Like the people of Poblenou, we are at our strongest when we gather, make things and share knowledges together as a network, within the spaces and places that matter to us. We are especially strong when we take the time to really listen to those spaces and those places. It is only then that essentialised neighbourhoods like Poblenou can truly speak.

Martin R. (2015) The best of Barcelona’s neighbourhoods – Poblenou. Time Out. Available at: http://www.timeout.com/barcelona/things-to-do/the-best-of-barcelonas-neighbourhoods-poblenou

O’Sullivan F (2015) Tourist-Heavy Barcelona Is Cracking Down on Airbnb. Citylab. Available at: http://www.citylab.com/housing/2015/12/barcelona-airbnb-tourism/421788/ 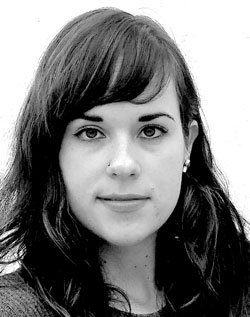 Kat Braybrooke is a critical designer and researcher who has spent the past 10 years exploring the ways open technologies and creative, hands-on methods can empower underserved communities. Her current PhD research, “Hacking the Museum Together?” is funded by the University of Sussex Digital Humanities Lab and explores the social, cultural and political ecosystems of space at sites for digital making and learning as they emerge within cultural institutions in London, including the Tate, the British Museum and the Wellcome Collection.